Ain't this some monkey business. A cartoonist attempting to play off of the recent chimpanzee attack in Stamford, Connecticut wanted to connect a few dots with some recent political plays. The cartoon, shown below, depicts a chimp shot dead by the police, with one officer suggesting someone else will have to be found to write the next stimulus bill--a stimulus bill so ill-conceived, as far as I'm concerned, that it must have been written by a bunch of monkeys. But I know I'm not alone. Before this cartoon came out, I had heard that common idiom purveyed by many pundits and talking heads in our esteemed media. I wish I had paid more attention then, simply to see if by chance any of those same pundits are now among the throngs claiming this cartoon is a racist attack--or worse, a blatant invitation to assassinate President Obama, as still others have suggested. The point is that when the stimulus bill was being debated and finalized, many of us who are profoundly discontent with this legislation equated those responsible for it with a bunch of monkeys. That was fine. No one complained or claimed that it was racist rhetoric. Why? Because it's a common idiom. So monkey see, monkey do: a cartoonist employs this acceptable language in a cartoon format within the contemporary context of the recent chimp attack and a ridiculous stimulus bill. And now it becomes unacceptable? Even evil? I don't think so.
Furthermore, it's been frequently pointed out that Obama did not write the stimulus bill, anyway, that it was an assortment of other Democrats. This is true; let's be accurate here.

The fun part is that Obama's appointment to Attorney General, Eric Holder, recently said, "Though this nation has proudly thought of itself as an ethnic melting pot, in things racial we have always been and I believe continue to be, in too many ways, essentially a nation of cowards." You know, he's probably right in many ways. The question is: who can blame us when even a benign cartoon--one not at all implicated in race--is demonized along with its artist as racist? How are we to even begin a dialogue in such an atmosphere?

I would say we should cut out these ridiculous knee-jerk responses, but that would only be part of the solution. Those responses are fed and supported by a conflict-driven media; where conflict doesn't exist, one must be created. The human ego has a hard time turning down the opportunity for a national podium, so naturally when it's offered on the condition that it participate in the conflict, it's difficult to resist. Can't we all just stop monkeying around?

(Edit: My blog seems to be cutting off the edge of the cartoon. Just do a Google search for chimp cartoon and you'll see the full thing, if you've not already.) 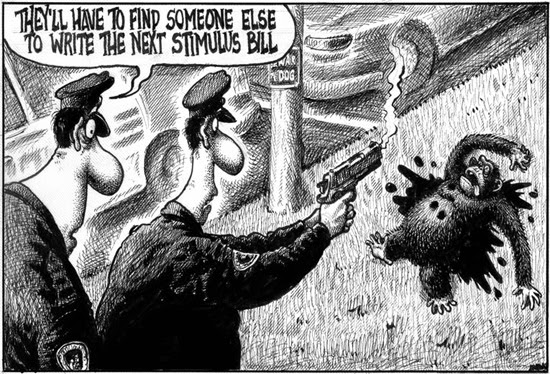