Some time ago, I was asked if my car (a black Dodge Avenger) had a name. This was not the first time I had been asked; I never had any response, any name. I had never committed any thought to an answer prior to the time I actually gave one. In this instance, I responded extemporaneously that my car's name was Napoleon, as it was carrying me with fortitude through adversity but was bound to leave me broken down in a winter wasteland. Long has it been my expectation that Napoleon's end would come in the form of a Russian winter. Recently, I was proven wrong.

Two days ago, Napoleon and I met our Duke of Wellington in the form of a pick-up driving redneck in the town of Carrollton; our Waterloo was the intersection of East 4th and Leslie.

After a visit to the grocery store, I was heading home. Traveling down East 4th Street, I approached what was to become my Waterloo. Obeying the speed limit as I truthfully was, I saw out of my peripheral vision a truck barreling toward the intersection. However, a house that clung to the intersection like a fat kid to cake, combined with a shrub (that is, the house, not the fat kid, was combined with a shrub to impede my vision), prevented me from seeing this truck until it was right on the intersection--actually, right about even with the stop sign that was ordering the vehicle to hault, only to be scoffed at by the negligent redneck. I myself was only around 15 feet from the intersection by the time I spotted my assailant.

Seeing the other vehicle, which I estimate to have been traveling at around 35 mph, I slam on my brakes as I break the threshold of the intersection--the intersection that hosted no stop sign for my street. The Duke of Wellington had obviously forgotten what the word "STOP" meant when enclosed in a red octagon; he continued through the intersection, heading toward brave Napoleon. My foot, hasty to reach the brakes, was able to slow down Napoleon just enough to resign my attacker to hit my front left corner rather than squarely on my driver's side door. Thus, rather than being "T-boned," the collision was angular, and angled the redneck Duke into a nearby telephone pole, while simultaneously lessening the impact for me.

Though Napoleon is likely totaled (yes, sadly, his reign may have reached its end), it was merely a Pyrrhic victory for the Duke of Wellington, who had to be towed away from the battlefield.


Witness Waterloo! Again, the majority of the damage was to my front left corner, so this is not the greatest angle for illustrative purposes. 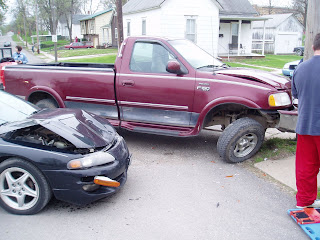 Update (04.09.07): The Duke of Wellington asserts that he stopped at the stop sign (ha!) and that the accident was the fault of me speeding. The insurance company, however, assures me that his claim stands no chance.

Update (04.18.07): Napoleon is officially totaled, and of course the other guy's insurance is paying for it. I'm driving my mom's old car for the time being, and will not attempt to replace Napoleon until I figure out where I'm going to med school.

Currently listening to: "Said the Spider to the Fly" by The Paper Chase
Previous activity: Hanging out with the parents
Next thing on the agenda: A phone call to Ashley, then an early bedtime
Thus spoke Luke at 9:50 PM